Girl of Nothing Ever Dies 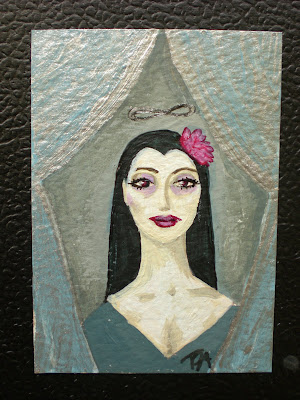 What can I say? I painted a vampire.

Fine, you can't see her teeth, but she's hiding them. I got the urge when I saw some vampire somewhere else. I thought, hey, I paint all sorts of literary creations, why not this one. I like Vampires. And sadly, she looks more like me than any of the other goddess girls. The black hair and pale skin, the widows peak and dark eyes.

But beyond cultish stories of Bella and her predecessors, there's a meaning to this.

I have been amazed again and again that ideas I had years ago keep coming back. This very idea of goddess girls was percolating in a different incarnation many years ago, when I thought I would paint modern day gods/archetypes and sell them on the street corners of the East Village in NY. Gosh that was years ago, and I never did it. I thought the idea had passed.

But it rises again, in slightly different form.

And that gives me hope for all the other ideas that captured me once upon a time and died a death of neglect or indecision or whatever.

If these ideas never really die, then is it really important which one we choose in the moment? If I choose goddess girls right now, and let go of the idea of pendant... it's okay, because the opportunity for pendants will come back when the time is right.

Yes, I want to create resin pendants and have wanted to for years, but haven't.

And that idea feels like it is stirring in it's garlic twined coffin. So are many others.

The important thing is to just make a choice. To not stand in indecision afraid to decide on one if the others might die. They don't die. Not if they have power. If they have power, they stick around for the time when they can drink your blood and fly through the night.

Ha ha. No melodrama here. Maybe I should write a vampire novel. :)
Posted by Rowena at 4:42 PM

Better to live with more ideas than you can choose from than to have your mind empty long before the end. You have to make choices and maybe some things will never be done. That's okay, because you never know.

I see her dancing a flamingo in spain, luring with those eyes and a feathered fan.

Do you know who you remind me of, at least in your profile pic?

If you write it, I will read it. Hey you will get paid for the book and the art, you might want to consider it:)

This is lovely, Rowena, the idea that good ideas never die, that they will come back again in new form when the time is ripe... I hope that holds true for me, too!