Somewhere Under the Rainbow 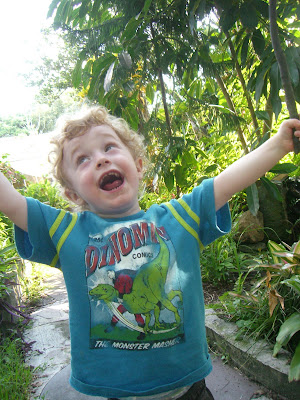 Yesterday, I slathered up on mosquito repellent (I am freakishly attractive to the little buggers, which sucks, living in Florida,) and grabbed up my art bag and my two kids, and opened the door on the garden. They spilled out like puppies, running all over the place and happily picking up sticks and leaves to toss into their collecting buckets. I gave them cookies and milk in sippy cups and let them have their free reign, while I sat down, to, hopefully get some painting done.

And then, it started to rain. You see, we are still being hounded by Tropical Storm Fay, and it has been gray and threatening for a week and a half, which is one of the reasons we have not been playing/sitting in the garden. Oh no! I thought, packing up my paints that I had just gotten out. Closing my new Moleskine to the onslaught of the raindrops. Do we run inside to hide or do we wait it out in hopes that it is just a sprinkle???

I looked at my kids. They were so happy. So I said, heck, what's a little rain in the middle of summer. Go ahead and play. They splashed around, I hovered over my Moleskine, wondering if I could get something down, wondering if I could risk it, wanting to DO SOMETHING CREATIVE but feeling frustrated. The rain came down harder. I frowned at the obstacles to my creativity once again. I drank another sip of my sherry on the rocks (it was almost bedtime and I'd had a bad week.) Then I looked out, as the rain fell in buckets and saw that it was sunny.

Sun spilled across the sky, lighting the trees with a golden glow, and yet the rain still fell. I jumped up, forgetting the paintset, forgetting the empty journal, forgetting the camera that I had lost and so was painfully absent on our garden romp, forgetting even the sherry, and went running to see if I could find a rainbow.

Rain + Sun = Rainbow, right? But no, there was no rainbow.

I stood there in the garden, the little wet puppies wriggling around, their hair curling up with rainwater, and all of a sudden, I gasped.

Can you see a rainbow when you are standing under it?

If I were standing a mile away, out of the downpour, would there be a rainbow arcing over my house like a blessing?

Here I was in the storm, sun be damned, and all I had was the rain, and a little bit of sun that didn't chase the rain away. It is so easy to see the storm, the troubles, the mud, the wet, the puddles, the difficulty and the inconvenience... but do we see the blessings?

That's when I let it go (to be truthful, just for the moment, but I let it go.) I smiled at my kids and danced along with them in the puddles. The rain felt nice in the heat of summer. I picked some multicolored pink and yellow croton leaves for the kids to use as "wings" and they flew around the garden. I just played, that's all.

And then the rain passed, the sun hid itself behind the clouds again. I never found the rainbow...

Put a rainbow in your heart today! :)

I moseyed on over from suziblu's blog... I really enjoyed your post. It reminds me of those wonderful carefree summers we all had when we were little and had nothing to worry about other than sandcastles and bathingsuits for two months straight. Ah, those were the days.

Nice to meet you,
Cheers!

I've lived in Tallahassee, Pensacola, Fort Walton Beach and Milton Florida....honey, those rainstorms are NO small matter. Once, when I had my own place in Tally I was so stressed and needed to be doing so much and I was about ready to have a mental breakdown...the rain started pouring and dripping and drowning the streets. I knew I was losing it, i went outside and lay in the road by my house, a hill with buckets of water just flowing down the river. Fully dressed, in heavy jeans and shirt...then, if that weren't enough, i decided Ijust needed to be submerged to block everything out. i went to the apartment complex pool and jumped in, again, fully clothed. It was lightning and thundering and people came out on their decks and terraces to yell at me to get out of the water because I was going to get killed. I just sinked back below the surface and ignored them.

That got me quite the Syliva Plath reputation around those parts.

But sometimes, you just need to let it go and connect with the elements.

I am glad you were able to do this friend.

This is beautiful Rowena. I can just imagine rainbow colors dancing, unbeknownst, all around you. What a blessing!