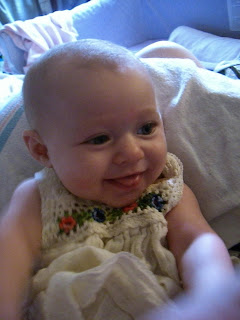 I feel like G often gets more of the attention, more of the updates, more of the photos. He's up to more stuff, so it's easier to focus on him than it is to focus on Ivy, who is still a baby and not into so many things.
But Ivy is indeed doing things. New things. Big things. Well, big baby things.
She is laughing. That's a lot of fun. When they start reacting like a real person to what you are doing. It's fun to try to make the baby laugh. Luckily, she's pretty ticklish. Under the chin and cheeks. On her belly, her sides, her back. The feet. Tickly little chubby baby.
Yes, she's a little chubby now, which is a relief after the scare with her not gaining weight. Now she has apple cheeks and a round belly and chunky turkey thighs.
Ivy is also starting to sit up without being held up. I mean, she's still not very stable, but she is sitting up. And she likes to try to sit up from laying down, exercising those little abs.
She's rolling over from back to front-- which means no more leaving her on the sofa while I go get her a bottle. Closely tied to this, she's scooting around in her co-sleeper. I lay her down in one direction, and when I went in to check on her, she was in the complete other direction. Wiggly babies must be watched more closely.
She is also grabbing stuff, now. Stuff like toys. She loves to hug Gabriel's old little blankie with a dog head that Patty gave us. He was ignoring it. She likes to hold on to it and chew on its head. And she also showed delight when I showed her my old Holly Hobby doll that I got when I was three years old. Instant love for Holly Dolly. Girls are different from boys, it's so weird.
And now that we have finally gotten our double stroller, Ivy and Gabriel both love to sit in it and go adventuring to see what they can see. I know Ivy loves to watch the world go by, because when I put her in the position where she can't see anything (the one for infants and sleeping babies) she screams her little head off!
Okay. That's the end of the update.
Oh yeah, and she's Gee-orgeous!
Posted by Rowena at 2:03 PM