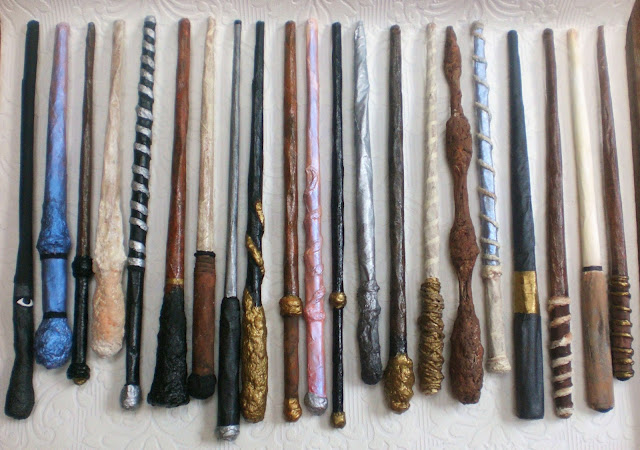 Wow. It was quite an endeavor. However...wand making is not as hard as it seems. I think it was the number of wands that made it a big task. I thought that I would do a post that explained how I did it, but I soon realized that it would be a HUGE post, since not only did I make the wands, but I used a few different methods for decorating the wands. So I've decided that I will break this post down into two posts. It will still be long, but not quite as long.

Make the wand forms.  This is not the pretty part. This is the part where you go, "how is this paper tube going to end up being a cool wizard wand." I gave you a sneak peak of my process here, with a photo of some unembellished paper tubes along with some that are already decorated and painted with an underpainting. 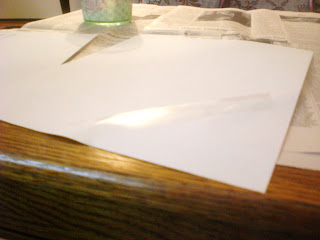 I started out with this tutorial from Dadcando (great reader examples here).

This is one plain piece of copy paper with a piece of double sided tape placed kitty corner near one edge of the paper. I did this for my kids, to help stabilize the paper as they rolled it, but I did not use the tape when I was making it myself. 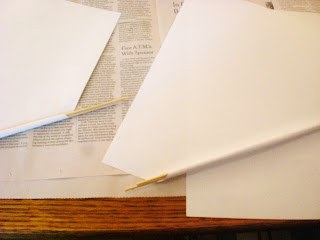 Then I take a few bamboo skewers (these are thin so I used three) for stability. I have also used chopsticks here, but I had more skewers. I did wands at Christmas without skewers, and while they looked lovely, they weren't that sturdy, and now (8 months later) are bent and broken, much like Ron Weasley's. They would be fine for display or for adults, but not for children with active imaginations and who enjoy vigorous wand waving and sometimes forget to put them safely away. I believe the skewers will help with this problem.

I start the skewers at the bottom corner and roll them tightly into the paper. The tighter you roll them, the thinner your wand will be. Try to keep the paper straight. This will create the basic shape of your wand. 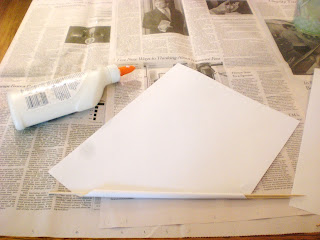 Take your paper with the skewer rolled in one end and take your nice ubiquitous white glue and squeeze a whole bunch of glue all over the paper. You want it to be a heavy but even layer. I did not smooth the glue out, but I did make sure that each section of the paper was liberally covered. This glue layer will harden and give your wand the solid feel. Because without the glue, it's just paper and you will feel the paper.  Make sure you get those corners, too, because those corners have the fewest layers of paper/glue so need to be firm on their own.

This is also the trickiest part in rolling, because the glue can get slippery, so make sure you are rolling smoothly. Avoid wrinkles if you can, because they will be visible in the wand (although, you can actually work with a badly wrinkled wand to create something with a more organic shape. I will show you how I did this in a later post.)

Roll the paper all the way to the end and smooth the glue all around the wand tube, getting rid of as many wrinkles and bump as you can.  It's okay if it's not perfect because imperfections add character to the wands. There are skinny wands and fat wands, smooth wands and bumpy ones. Sometimes, my kids created fat tubes and cried about them not being right. I told them not to worry, and then stuffed the mostly empty tubes with more skewers to give it more stability. Stuffed as many as I could fit down in there. Hey. It worked.

Let your wand tube dry. Then you can continue your embellishments. Once they are dry, you want to snip off the ends of your wand, which will be pointed, with the corners of your paper. You want them to be flat and round. This is the point where my technique differed from the one on instructable. My glue gun bit the dust and I didn't want to go out and buy another one, because frankly, I found the glue gun to be a PITA from the get go. I think it was a bad glue gun, but even so, I managed to figure out my own non-glue gun method that works pretty well.  It entails more white glue and tissue paper. That's it. 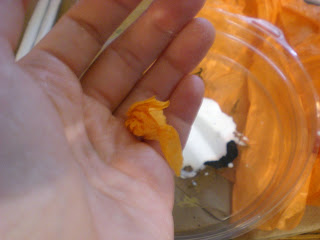 The first thing you have to do is plug the hollow ends of the paper tube. Take an appropriately size piece of tissue paper and crumple it up into a ball. 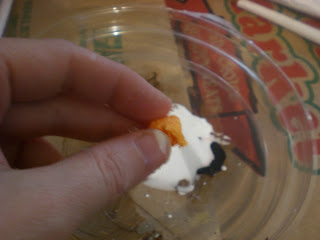 Dip the ball into elmers glue (that's my glue palette below the ball. I'm using a plastic lid) and smoosh it up until it is a squooshy, glue filled wad. 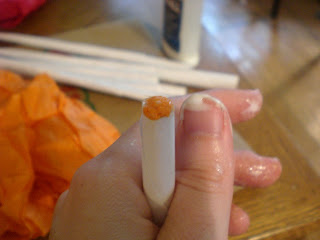 Smooth it with your fingers so it fills the hollow all the way. It doesn't matter how it looks, you'll be painting it over later. Only the texture matters. If it isn't smooth enough, drop another bead of glue on it and smooth it some more. The tissue and glue together end up making a kind of dough like consistency, almost... paper mache. This is a messy process, just so you know. Glue all OVER your hands.

Plug both ends of your wands. You might have to fiddle with different sized paper wands to find the right plug, but it's not that difficult and it's just tissue paper. Once the wands are plugged and the glue is dry, you can add your embellishments.

This is what my paper tubes looked like after I added embellishments but before I painted them.  For this post I am going to continue with the tissue paper method and show you the embellishments I made with tissue. There were two types. 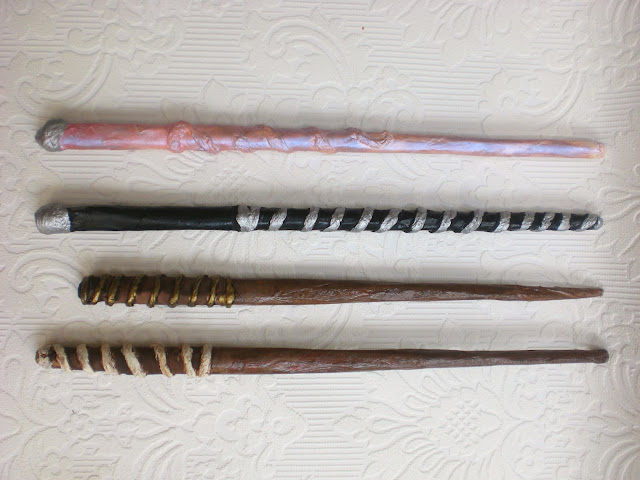 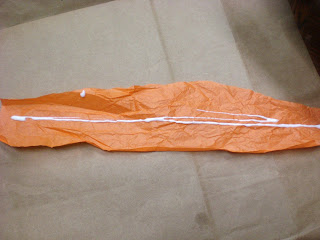 The first type was made with a long strip of tissue paper. I squeezed a line of glue out in the middle of the strip. 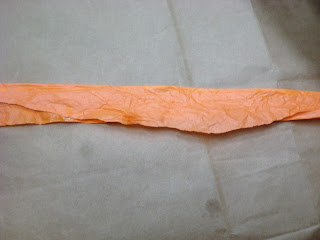 Then I folded it up 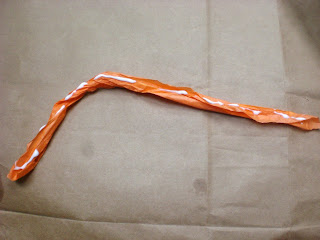 Twisted the fold, and added more glue. Twist it with your fingers until it is a tight twist and the glue is well mashed into the paper. 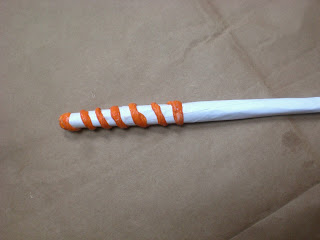 Twist it around the wand until it looks the way you want. Add more glue if needed and smooth the twists out with your finger. It is very moldable when there is enough glue. If there's not, add more. If there's too much glue, just smooth it over the wand with your fingers. More glue will not hurt it just try to keep it smooth because bumps will show through the paint later. You can add as many twists as you like. Be creative. Then let it dry and you can paint it. 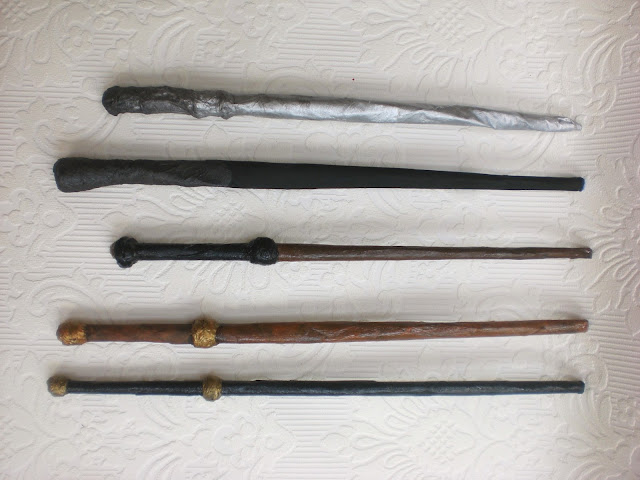 This is done with much the same technique, and starts the same way, but rather than spreading the twists out along the wands, They are bunched up all in one place. 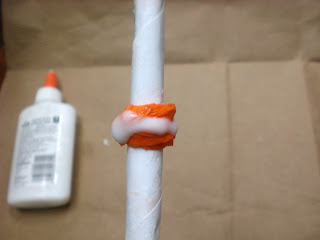 Here it is, with the twist wound up around. You would still be able to see the twists at this point. It looks almost like a turban. But if you would like to smooth it out more, add more glue and with your fingers, mold the bump into a shape that pleases you. 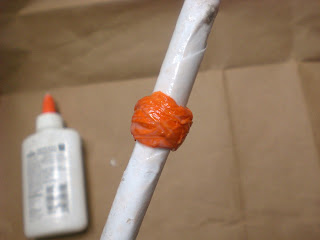 Here it is all smoothed out. To me, it looks like a bead. I like to place a bead at the back, like maybe a gemstone, and then a bead at the top of the grip, to keep a wizard's hand from sliding up the wand. 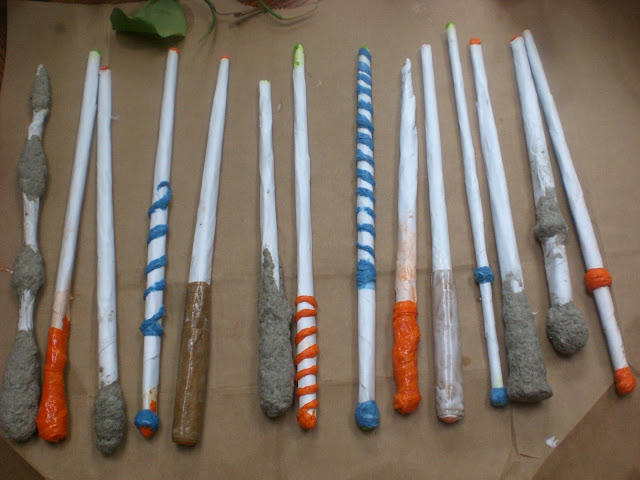 Again, at this point you let them sit and dry. When they are dried you can paint them, and that is where the magic happens.

Here you can see both the twisted paper and the molded paper. I had some orange paper and some blue paper.  With the larger molds, I started with the bead, and then kept adding paper twists and smoothing them out.

The other two types I have here are a paper mache and a brown paper bag version that I will show you tomorrow. I also used yarn/string for a couple of wands, but didn't really like the way those worked out so didn't make very many.

This is a real paper mache wand. After using the materials I did, I begin to think that you could really use any kind of paper and sturdy glue. I think the old school version of flour and water might not work so well, but there are many other glues that might. I liked that the white glue was so cheap and easily available, because I did use a lot, maybe two or three smallish bottles. I should have gotten one of those big jugs of glue, but I wasn't aware that I would be using so much.

So that's it. Paper and glue and skewers and paint. And not that complicated. It's definitely something most people could do, although younger kids would need help with a few aspects. It's also super cheap. If I hadn't been making so many, I would have been fine with materials I had around the house, some recycled. But as it was, I bought some extra glue and some extra craft paint, rather than using my more expensive fluid acrylics (which I think actually work better.)

I hope you enjoyed it. If you try these wands, I'd love to see a link to what you create. Or if you manage different versions with different techniques. Paper clay? A base of a garden twig? Embellished with gemstones? It's so much fun, I encourage experimentation.

For more on how I embellished the 21 Harry Potter wands, go here
Posted by Rowena at 11:21 AM

I love these! They are awesome! When my boys get bigger, we will definitely be making these, thanks for the great tutorial!

Found this post in an online search for Harry Potter wands and had to say WOW! Great job on these. Thanks for taking the time to share your process. I think I may be feeling brave enough to attempt it and can only hope to get results as good. Cheers!

Spaghetti. That's a great idea. In essence, it's just flour paste which has long been used in paper mache.

I absolutely loved this!!!! Amazing

These are brilliant friend! They look authentic! Great work!!

Do you think kids (age 7-9) could make these at a birthday party, or would they not dry in time to paint them?

They can't dry in time.

i was looking through and these were just perfect for my project! i love them and they dont even need hot gun glue which i dont have. i will 100% be making this and i got to say WOW because u are AMAZING!!!!!!!!!!

Wow, I never knew you could make wands with no hot glue.

I made one and it’s so amazing!
I love it! ( even though I have a Luna Lovegood wand😃)