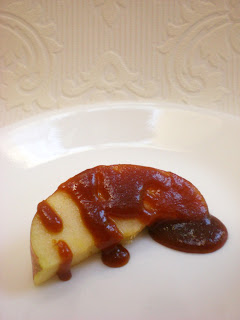 Yesterday I was taken with the urge to try to make a salted caramel sauce. Luckily I came across this on pinterest.

I've never made caramel sauce before, so I pretty much followed the recipe exactly... well, except I cut it in half, since this was an experiment and I didn't know if it would work out. Oh yeah, and I didn't have heavy cream so I used half and half. And my butter was salted, so I cut back on the sea salt.

1 cup white sugar.
6 TBS salted butter
1/2 cup half and half.
about a teaspoon of sea salt (not fancy flaky sea salt)

I covered the bottom of a heavy, large pot with the sugar and heated over medium high heat, stirring pretty much continuously. It took a long time. At first I thought I was doing something wrong, because it wasn't clumping up like the recipe said, it was just getting to be hot sugar. But as Susan pointed out to me, it takes a while for sugar to get up to 300 degrees. Interesting she kept saying 300 degrees, because the original recipe said 350.

So soon it clumped up and I stirred it with a whisk like the recipe said until all the sugar was melted. And then I stopped stirring because the stirring will make it seize up. I swirled the pot a bit until it got to the right color. I didn't use a thermometer, because I didn't have one, and I thought I"d seen sugar being cooked enough to be able to judge the correct color change.

Then when it got to a nice caramelly color, I put in the butter all at the same time. Good thing the original recipe warned that it will boil up quite a bit (which is why you need a bigger pot than you'd assume) It really boiled up. Susan says that's because it's 300 degrees and it will bring the butter up to that temperature, but then it settles down and I stirred it until the butter was melted completely and then I turned off the heat.

That's when I added the half and half, and I think I should have done it even more slowly, because it REALLY boiled up and I almost burned myself. So be careful. Whisk again until the cream is incorporated and add the sea salt and whisk until smooth. Let cool 10-15 minutes and put in a glass jar.

I must say that I didn't wait 15 minutes. I HAD to taste test it.

My caramel sauce is quite salty. And the caramel has a very slight bitterness to it, because I think I cooked it just a tiny bit too long. Susan told me it was because the caramel kept cooking after the butter and cream was added, so that counted for the darker taste than I wanted. I thought I was so clever to "know" the right color for the caramel, and then I got confounded by the rest of the cooking process. Oh well, live and learn.

I also told Susan that I thought my caramel sauce was a tiny bit too grainy, and she said that it was okay, and that I could just heat it up and stir it and it would get smooth again. Have I mentioned how much I love having a pastry chef at my disposal? Pastry chefs have sweet brains for picking. Susan also told me to use better butter and that I would be surprised by how good butter would affect my baking.

However, the toasty flavor and excess salt in my caramel sauce did not stop me from enjoying it by the spoonful and giving myself a stomach ache.

Sadly, I did not have the brainstorm of dipping sliced apples into the salted caramel sauce until I already had the stomach ache. Because when combined with the sweetness of the apple, all the saltiness of the caramel sauce is offset and instead it is just an explosion of flavor.

I recommend anyone try it. It wasn't hard, although getting it to the right temperature/color is a little intimidating. If you want to try it, I also recommend that you go to the original recipe link, because not only is it more complete than mine, but she also has pictures. I was too frightened of burning sugar to take pictures, plus my light sucked.

All in all, I enjoyed this experiment and am looking forward to all the delightful treats I will be able to grace with a salted caramel sauce.

Did you know that you can shorten your urls with AdFly and make cash from every click on your short urls.