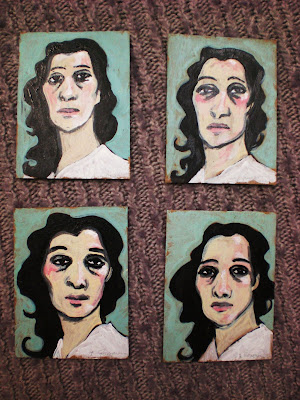 Yesterday, I had the urge to paint a self portrait. I actually painted one a few days ago that I was not pleased with. I thought, I don't really know what I want to paint... but really, I didn't know HOW I wanted to paint. 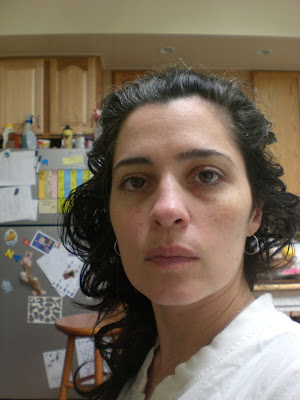 So I snapped a picture. This is it. I took my hair out of the bun, and it tumbled down. And I liked the motion in the tumbled hair, so I decided to use it as the basis for a quick drawing/painting.

Then I had some 3x4 pieces of chipboard that I had cut out, because I like to cut my recycling into useful bits. Then I took a sharpie and drew out a quick contour drawing. Moments, it took only moments, and that's the way I liked it. 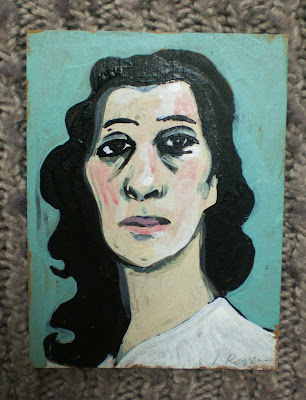 Then I filled the face with titan buff, and outlined the features in black, colored in the hair, added some pink, shaded a bit with pink, buff and black, painted the background with cobalt turquoise and buff, then added the white hilights and shirt. 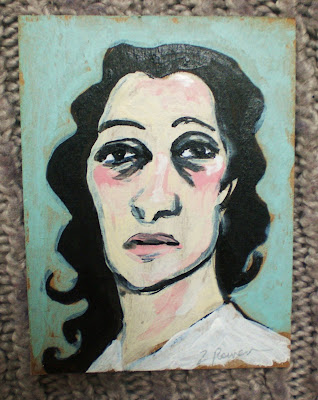 Then I took out another piece of chipboard and did it again. I was afraid to ruin the first one, because I liked the expressiveness of it. Thought maybe I couldn't do it again, it wouldn't be the same, I would lose whatever it was I liked. Except that didn't happen. The next painting, using the same techniques was different from the first, and in some ways better. Some things worked even better. I even went back and added some of the things I learned from the second piece into the first piece, taking from both sketches to improve the painting. 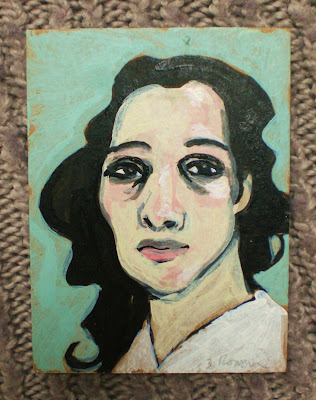 Each time I started over, I came to the painting with more to give. And I learned more from each painting. And each painting became it's own, important, individual thing, with something new to reveal about the subject. I like the swoopy feel given by the contour sketches. I like that the features don't stay the same, but there is still emphasis on the same things, the eyes, the cheekbones, the jaw and hairline. I like the way the hair changes shape each time, tumbling through the variations. 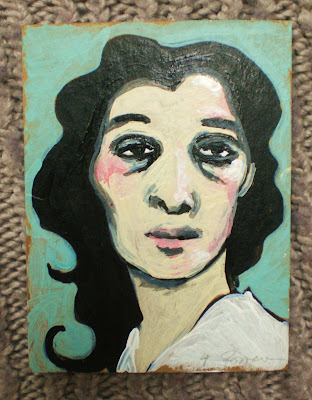 This is a great exercise to try, to lower your own expectations of yourself, to handle your own fear of not doing things right or not being perfect.

I spent twice as much time on that other portrait (which I'm not showing you) and like it have as much as each one of these. There is something to be said for loosening up, and not being so attached to a perfect outcome.

Try it yourself. Try to make small sketches of the same theme. Or take your recycling and turn it into something, without worrying that you are ruining something valuable. Or take an old story that you have given up on and chop it up, rearrange it, remove characters or throw in a plot twist. Take an old shirt that you no longer wear and make it into something for summer. Chop it up, stitch it back together, add something that is special, but not precious to it. Accept it for what it is, and then make it loved.
Posted by Rowena at 9:15 AM

Your words speak straight to my heart, tonight I will try this, and maybe just maybe get out of my painting rut. I hope one day you do publish your book, as I find your outlook so refreshing and uplifting !