Cardboard Pirate Sword Tutorial, or The Hero of Your Own Story 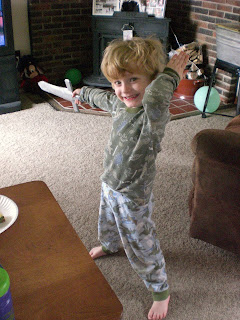 I have so much to say today, so many ideas about art and life and being a woman and owning our own stories, I'm afraid I may get a little bit long winded. And these thoughts are all wrapped around the context of this little boy, and his desire to have a Pirate Penny Carnival. Now I don't know if that Pirate Penny Carnival is going to be the extravaganza he imagines (one that will make him money, too, he thinks). It might be closer to a barbecue with a cardboard pirate ship, costumes, a hideout and a treasure hunt.... but I'm pretty sure he will still be happy with it.

That's a cardboard sword in his hand, and it is only one in the myriad projects we have planned for his Pirate Penny Carnival, and I will sort of give you a tutorial on making your own really sturdy cardboard pirate sword. 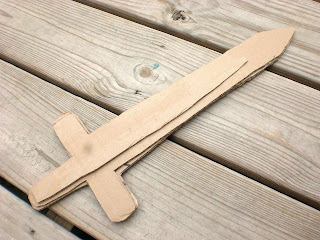 (Trace on a piece of cardboard TWO matching sword shapes. Cut them out with scissors. Trace and cut out also TWO long narrow semi pointed cardboard shapes to act as braces along the sides of the sword, from the hilt to about 4/5ths up the blade of the sword.)


How did this sword come into being?

He asked. He told me what he wanted in his life, and he told me again and again until I did something about it to make it happen. 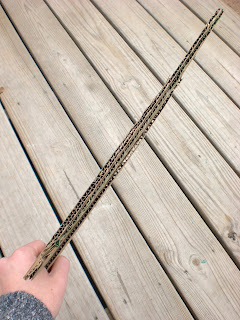 (Glue the two matching sword cutouts together. I used acrylic gel medium, but I'm sure white glue would work, too. Then glue the narrow brace pieces to either side of the sword blades. These will keep the sword from flopping too easily. Clip the pieces together or weight down so that the glue can dry. Let dry. There should be FOUR layers of cardboard glued together.)

I want to learn a lesson from this. If there are things I want in my life (like to be a writer and an artist) then I have to declare to the world that this is my intention. I have to enlist the people around me in my goals. I have to say, "dear S, I need to have two hours, without children, every day in which I can revise the third draft of my novel, so I can send it out to agents and become the published author I have always dreamed of being."

The truth is I may not get everything I want. Perhaps I will only get those two hours every other day, or only one hour. Or two days a week completely to myself to work. I don't know... but I do know one thing, I won't get anything if I don't ask. 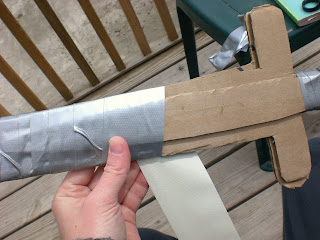 (Once the glue is dry, take a roll of duct tape and carefully and slowly wrap the sword, starting at the point. Try to keep the tape straight to avoid wrinkles and bumps. Smooth as you go.)

I think it is particularly hard for women to ask for things, especially when they are mothers, but not always. A long time ago, I decided to give up the "selfish" dream of being a novelist/poet/artist in order to become a teacher. Now, I also wanted to be a teacher and help kids, but I really wanted to be a writer and artist. But I thought it was selfish, and perhaps a little (a lot) scary.

I was only in grad school for teaching for a couple days when I realized that writing, the arts, literature and all that were absolutely not selfish things, but by then I was off on a passionate adventure in teaching.

And while I was teaching, I learned the power that art (and music, and theater, and literature, and poetry, and dance) had to save. Truly. Salvation. Kids with no motivation were lit on fire by poetry. Children who thought they were incapable of anything became artists, and interested in school. Girls who were afraid of their own beings began to believe in themselves. Boys who had never had a voice learned to speak. 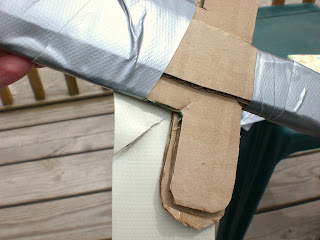 (When you get to the hilt and cross pieces, cut angles in the tape so that you can fold it around the edges without wrinkles and bumps. You can also cut angles at the end of the hilt and cross pieces, so that the tape can go around those edges without bumps. Try to makes sure no cardboard is visible, for strength and water resistance. Because Pirate Swords must face the high seas.)


But flash forward another eight years, and here I am feeling guilty about taking time out of the busy life of a mom, taking care of kids, cooking, cleaning, doing laundry, family obligations, work, sleep, in order to take care of my art. Feeling like, unless it was earning a living, my art was an indulgence and, yes, selfish.

Maybe in a way, taking time away from taking care of others is selfish. But maybe women aren't selfish enough in the right kinds of ways. 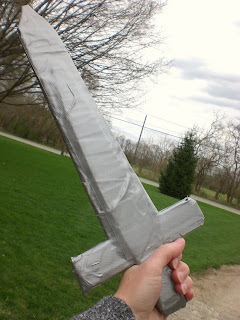 (Here is the sword. You can see there are indeed lumps and wrinkles. You can smooth some more tape over it longwise if you'd like to gentle the tape edges. It is surprisingly heavy and sturdy. WARNING: If you have two kids, you must make two swords, or there will be fights over who gets to play with the sword and the sword will have to live on the top of the refrigerator until it gets a mate.)

Or the hero in our own story.

Love, love, LOVE how you wrapped the Hero of Your Own Story bits around the tutorial on making a pirate sword just like you wrapped duct tape around the sword!

I giggled at your WARNING - it's been sooo long since my kids were little - brought back memories! And I'm smiling thinking about the Pirate Penny Carnival (wish it was going on down the street, I'd be there to contribute!!) -

we worked on things like this when my son (who's 19 - and currently out of the nest) was little and they created memories that he STILL brings up (even while being his tattooed, badass self -grin) -Pirate Penny Carnival will ROCK!!

Michelle | When I Grow Up Coach said...

Oh, how I love this. And as a woman (but not yet a mother), I second the notion that we're out to please everyone else first. Not only are our needs not second, but they're usually last.

Learning how to say "no" was one of the first things I worked on when I started my life coaching training. My coach at the time gave me a great analogy: "When you're on a plane, you're always told to put the oxygen mask on yourself first before you can help anyone else. Because honestly - how helpful are you going to be if you're passed out in the aisle?" That's really stuck with me, & now I see your art as your oxygen, Rowena. Don't neglect it or else you'll wound up passed out on the aisle!

thanks for letting us in, Rowena. It's contant juggle, struggle...to find the balance isn't it. I think you'd like some of the stories on the blog ArtSaves: http://blog.crescendoh.com/art_saves/
xo,
me

Love this Rowena - it's so hard for women to be selfish, but (I believe) so necessary. Especially for mothers - we need to teach our children that it's okay to go after their dreams.

I have three boys. This cardboard sword is perfect! You could even decorate the hilt with scrolls of sharpie marker ; )
I'm including this in a mega Homemade Halloween Costume round up on my blog this week!
Jaimee @ craft-interrupted.blogspot.com

Did you know that you can create short urls with BCVC and make cash for every click on your short urls.

Its like men and women aren’t interested unless pirateproxy is something to do with Girl gaga! Your individual stuffs outstanding.