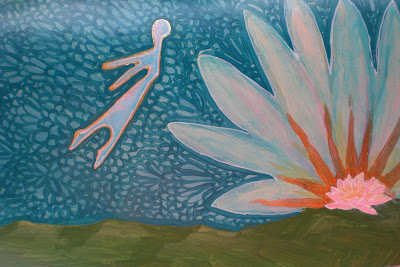 I almost feel a little embarrassed about posting another Flying Girl painting. I have even more waiting in the wings. I really have tapped some sort of inspiration. I think I was looking for this. I think I was working on trying to tap that well with the Hand paintings, and this was what happened. Flying Girl. I might try to go into my files and show you all the first Flying Girl painting. I did it when I was in college. I did not know how long the image would continue to echo in my life. I'll have to find the original.

Where did this idea come from?

This one, I can't remember when the initial idea came, but I do remember when I painted it. I've discovered a perfect time to paint. After the kids have gone down, once the house has been straightened and I have been fed and had the chance to snack on some ice cream or treat myself with some sherry. I sit down on the sofa with my bag of paints and turn on some tv, something that only needs half of my attention, a quarter, even.

That's when I paint. It gives me the time to both relax and be creative.

This one was a little stressful. I liked the idea so much that I didn't want to ruin it.

But ruin it I did. Many times. All the wrong colors. Lines too thick and clumsy. It never matched the image in my head, not once. Not. Fricking. Once.

But I didn't give up. I kept smooshing more colors on, trying another layer of sheer or of shadows or of texture. Tossed in the dark, changed it to light. Went all in with the gold paint, even if I wasn't sure it would work-- but it did.

I know there was a moment when I thought all was lost when I added the pattern in the sky. It was, it was a last ditch effort really, and when I saw something coming from it... it turned into a kind of dahlia pattern, perhaps a bit of a mixed metaphor with the lotus, but I liked it. Then I turned the sky lotus from yellow to blue and it almost became opalescent. Then I had to darken the ground, so I tossed in green to cover the tan that I originally had, which ended up being harmonious with the blue and the jarring tones that had been there faded and the painting rested.

I don't know how these things happen sometimes but they do until they feel right. I don't even remember what my original image was. I think it was something much more subtle, more realistic even that what came out, which I think was more visceral. But perhaps there is a lesson in this. Nothing ever matches the image that is in our heads. Maybe it shouldn't. There is no place, really, for the perfection that is our inspiration. Maybe what needs to happen is that we open up to the scariness of uncertainty, open up to the attempt to capture something true-- not ideal, but real.

Come to think of it, my creative process for painting and my creative process for writing are becoming more similar. It starts with an idea that I may or may not sketch out, and then I just jump in and start writing/painting. But each layer of paint is like another draft, where I allow the story that is to have more weight than my idea of what the story should be. Story, painting... whichever. Looking for the truth that lies beneath the words. The reality in the imagination.

Maybe that can give me a little faith that my novel will turn out just fine.
Posted by Rowena at 8:38 PM

The glow this gives off is fantasic...I think Flying Girl is letting her light shine!

I want a Flying Girl picture. Will you send me one?

This is the first time I've stumbled here and how I love your flying girl!
There was this black and white photograph of a woman standing on the edge of some cliff, her arms reaching upward toward sky, its light pouring onto/into her that comes to mind... You wouldn't happen to know the photograph would you? I first saw it in high school but its been years since I've been able to find it...

i love your series of flying girl paintings, rowena, and this is fabulous with the addition of the lotus. i admire your ability to follow your inspiration where it leads, even if it's away from your original plan, and have faith in the process.

The colors here are stunning. I love this one, very much.