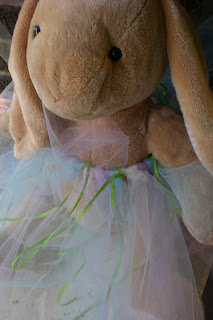 This is my Christmas gift for Bunny.... not the bunny in the picture, my little girl-bunny. And the gift is not the bunny. The bunny is just the model. The gift is the tutu. I made it. I'm kinda proud, because tulle is not my medium of choice. I got the instructions for no sew tutus from Chasing Cheerios. I made it with white, lavender and blue tulle, and tiny green ribbons, that added a nice brightness and shimmer. And the stretchy headband, just like Chasing Cheerios suggests.

I used 20"x3" strips of tulle and tied them onto the headband with a slip knot. That's it. Then I slip knotted the green ribbon every three tulle knots.

I think my headband could have had a bit more heft to it, and I think it could have been made attached to a ribbon to tie around the waist, instead. And maybe I could have layered the strips of tulle so it would be less airy and more substantial, but it's good for a not quite two year old.

Maybe I should make her a sparkle crown and wand to go with it. And to go with the pretty fairy tutu.... I think I'm going to give her a print of my Fairy, or Believe painting. I was going to make something new, and then I realized that painting would fit perfectly. So, no need to rebuild the wheel.

When I was a little girl, I always wanted a tutu. I think it's because I had a Degas print in my room, and wanted to be a ballerina. Or a fairy. 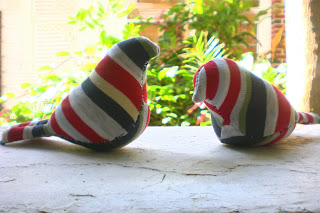 I also made the little birdies you're seeing all over the blogosphere. The pattern is at Spool. Look, here they are as Christmas ornaments.

Usually you see them made with mixed floral prints, or even nice organic cotton, but I decided to use my kids' old clothes. These here were made with their Old Navy striped pajamas. I liked them so much, I put them on both kids, girl and boy. So, sentimentality had me choose the cuddly striped for my first attempt at these. I'd like to make more, but take a gander at that stitching.

I'm not very good. And I don't have a sewing machine, so I'm doing it by hand. And rather than use them for ornaments or mobiles or wall art, I'm giving them to the kids to cuddle. When G first saw them on line, he wanted to hug it. So. That's what I'm doing. Cuddle birdies in the stockings.

As for my writing... the boy's naps are getting shorter. My list of things to do is getting longer. I spent much of the first week of December making lists. I'm afraid the novel is going to have to simmer for a while. I don't like putting it on the back burner, but I'm a little too stressed out, and a little too occupied. I have faith it will come back. Like Soulbrush said in the comments, it's nice to take a break and then have something to come back to. I see I will soon be able to come back to both my novel and my personal paintings.

Christmas is really such a busy time of year. Not only making and socializing and family... but also I feel the new year coming, and for me, that is about thinking ahead and making plans. Planting seeds that will fruit in the coming months.
Posted by Rowena at 2:12 PM

beautiful tutu!!! i made one similar a little while back for my little daughter... she's almost 18 months and wore it on her 1st birthday. it was more for me i guess as she was content playing with the bows and wrapping paper on her gifts. hee hee!

the holidays have so much going on, but like you, it is a time for me to reflect and consider things for the new year ahead. challenges to undertake and seeds to plant... i've been discussing this in my past couple posts... so exciting!!!

have a beautiful week!
peace and blessings

Rowena, these are beautiful. So obviously made with love, she'll treasure them her whole life. My mother made me similar things growing up - dresses, animals, doll clothing. I still have them, and have given them to my children. So, she will probably do the same. These are the things that mean the most. She is a lucky girl! :)

These are beautiful! Oh the Tutu is just so sweet... what little girl doesn't want a tutu, especially one made with love from her mom. You have inspired me.