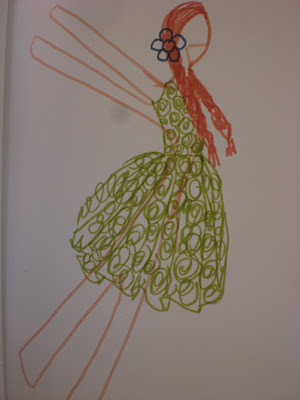 Last night, in the midst of sewing my almost 2 year old's Christmas doll, I said, "I hate sewing. I like painting much better." It might have been because I do all my sewing by hand, and my fingers were ouchie and probably growing needle calluses.

Painting is much quicker. And I have a better facility. Give me a pen and I can whip up an idea, lickety splickety. See? Look at the sketch I have above for my idea of what the dolly's dress would look like.

However, sewing, I'm working on the idea for a week. Hagrumph.

Let me give you a little background.

I don't sew. Or I haven't since I was 13 and trying to make a night gown with my grandfather's sewing machine. It was hard and I gave up. But my grandfather was the kind of person who rescued abandoned chairs, stripped, stained, recaned and reupholstered them. He was the kind of guy who built a sailboat from scratch in his boat barn and sailed down the Mississippi into Tampa bay. If you gave him some fiber glass, some bits of wood and a bolt of fabric, he could make you boyfriend. Well, okay, not really, but he could make you a boat.

My grandmother, on the other hand. The grandma on the other side of the family, really could sew. In fact, she was a seamstress in a sweat shop in what, 30 years later, would turn into the hip and trendy neighborhood where I lived. My grandmother used to sew my dolls dresses all the time. Whip whip whip. There was a dress. I believe I probably tried to sew some of them, too. And I distinctly remember creating a stuffed thing with my sister. We named it Shmoo. My grandmother also taught me how to crochet and embroider.

I never really took to any of the needle crafts. I'd fuss around with a cross stitch and then drop it. Same for sewing, crochet, embroidery, macrame, knitting, etc.

So I have a broad and beginners base of knowledge about sewing dolls and their doll dresses, a DIY ancestral attitude, and a year of HS fashion design where we learned the (very) basics of dress construction. And this is what I came up with. My little girl's dolly's dress... how lucky that the prompt for Inspire Me Thursday is Dress?

Doesn't look much like the sketch, does it? And yes, it stands up on its own.

Well, I realized my sewing skills and my fingers couldn't handle the gathering of the fabric. And then I remembered that I wanted to make her a fairy doll, anyway. So I went back to the tulle I had leftover from Ivy's tutu, and made that into a skirt. Doing it reminded me of when I made my sister's veil from her wedding. I made a crystal bead and silver wire tiara, too. See, there's that inherited DIY thing again. 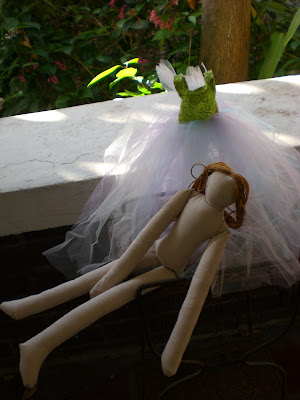 Here's a teaser of what the doll looks like, unfinished. Hair, still unbraided. Without a face or flowers.

I'm kind of pleased with the way she turned out. I combined a couple of different patterns and took what I learned from making the robot, and let myself be inspired by my Flying Girls.

And just so you know, I tried the dress on her, and she looks FABULOUS. But I'm saving that picture until I get all the ribbons and details on her.

So there you go. You don't actually have to be good at something in order to create something awesome.

You learn as you go. You make mistakes and fix them and change your mind and discover something better and then... then you get proud of yourself.
Posted by Rowena at 2:59 PM

Oh my, the drawing is wonderful and the dress just dreamy. I look forward to seeing her all dressed up, ribbons and all.

oh, it looks GREAT!! i know what you mean about sewing my hand, though-- it's so tedious. i like painting much better, too. your 2 year old is going to love that doll!

I LOVE the dress ...it's gorgeous!!! I love this post ...you are right on, you learn as you go. This is so gorgeous....and I'm curious what was Shmoo?? Do you have any pictures??

So happy to be back here..I was in another world for a bit but thinking of the Warrior Mama and FG...happy to return

What a lovely analogy - I can't wait to see what she looks like when she is all finished!