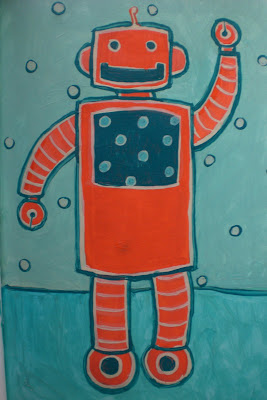 This is the continuation of the Boy's present. The Robot Christmas. This will be his painting, and it will go along with his stuffed doll that I am making. I did not get orange fabric, so, either I will have to use some old kids clothes, or make it blue. Or black, but then I wonder about the "goodness" of the robot. Maybe blue.

Yes. Many presents to make. All children? Why is that Rowena? Well, because children don't have the capabilities of turning on a computer and checking out mommy's blog. Don't want to give any secrets away, now, do I? 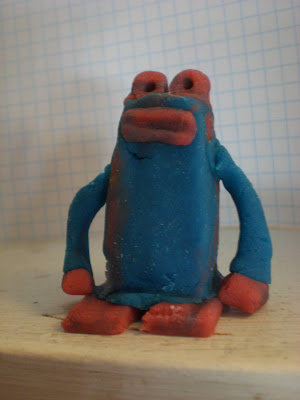 This was not part of the Robot Christmas... or it wasn't planned that way. We (the kids and I) were perusing etsy, looking for robots and dogs and cats. Lucky us when we found them at the same shop.

But once we saw them, and someone made the connection between robots and the balls of play clay in someone's hand, there was nothing for it but to make a robot out of play clay. Perhaps I should get some Sculpey and make some that will last and not crumble into flour and salt dust. I haven't made anything with Sculpey in a long time, but I used to love it. Figurines, jewelry, beads, assemblages. I once made a box with an antlered deity bust on top, and a flock of blackbirds inside. Man. I wish I had a picture of that one, but it was pre digital cams for me, and I gave it away... as a Christmas present.

Anyway, I still have (for the kids) a fairy crown, a fairy wand, fairy wings, robot mask, robot chest plates, laser gun, Robot doll, Fairy doll, felt cookies....hmm. I think there's more, but the boy just woke up, so my blogging time is up.
Posted by Rowena at 2:22 PM

very cute robot...love the painting and the prototype in clay is fun too. Am waiting to see the cloth one you create!

Oh my, what an adorable robot!

how beautiful!
Im now following your blog.. I found it via another blog. Glad I found it!

These are adorable. I want the red robot on a T-shirt. What a great t-shirt it would be for kids to sell online; I mean for you to sell online to kids. The clay version looks like a distant cousin of Kermit the Frog.

About a year ago, my intention was to open an etsy shop with kids' art and stuff, but my creativity took a different turn.

As for the stuffed robot? It's kickin' my 'bot.

sounds like it's going to be a super fun christmas! that robot painting is awesome. :) (and thank you for your wonderful comment on my blog yesterday-- it made my morning and was just what i needed to hear!)

oh! this would make a fantastic card, or a tee shirt, or a coffee mug, or...i love robots!

What a neat robot! Did you hear about the new robot that can talk and read the New York Times? Crazy!